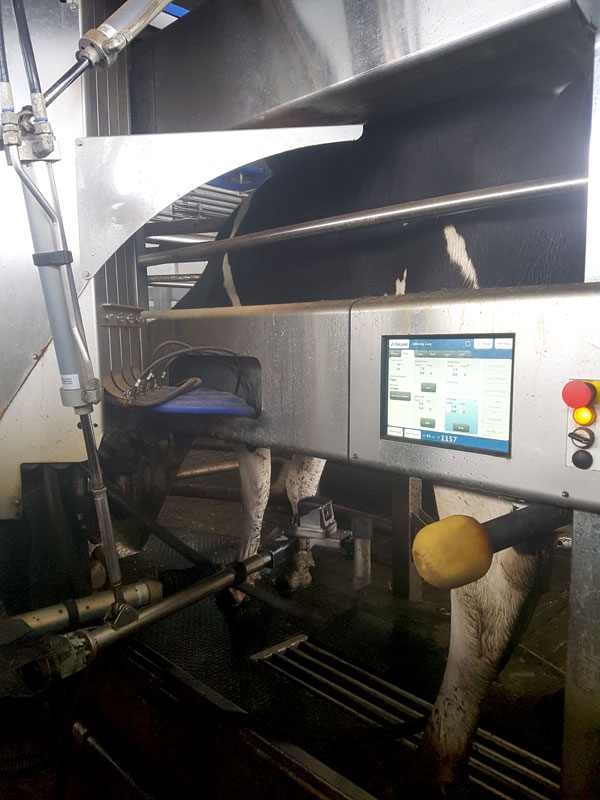 Members of the Sustainable Agriculture Project Reference Group visited the state’s first robotic dairies in Denmark to see how the new technology has changed day to day operations in the milking shed.

Two dairies, one privately owned and the other part of the Denmark Agricultural College, have been using the technology for a few years. Enticed to the milking shed by food, cows enter up to five times a day where robots locate the cow’s udders using a camera and attach milking cups.  Automatic gates with microchip readers turn cows away if they try to enter the shed too soon after a previous milking.

At a cost of around $250 000 each, the robots aren’t cheap, however one farm owner, Mr Malcolm Hick, who installed the robots three years ago, said he expected the payback time on investment was about 10 years.

Malcolm explained to the group that the savings in labour costs and logistics associated with finding and retaining staff made it a very worthwhile investment.  Another benefit of the technology was allowing greater freedom away from the dairy and a better work-life balance, an often rare experience for a dairy farmer.

“It was surprising to see the cows casually moving through the shed to be milked without any coaxing and enjoying a scratch from a well-placed brush on one of the gates.”

Members of the group also noted the lack of odour and flies and low manure levels around the dairy. Mr Hick explained that effluent production from the shed had greatly reduced as the cows no longer need to be held waiting for their turn.

“Rather than having to wash down the milking shed twice a day, it’s only required around two times a week now.”

“Working with dairy farmers to implement best practice in dairy effluent management is a key objective of the Reference Group and seeing how different farms operate is important in identifying opportunities to do things better”.

“Managing effluent on farms is a crucial component to reduce nutrient run-off into waterways”, said Bree.

The Sustainable Agriculture Project Reference Group is made up of representatives from catchment groups, government, industry and farmers and was established to oversee and value add to agriculture projects under the State Government’s Regional Estuaries Initiative and Revitalising Geographe Waterways programs.

The Wilson Inlet is a spectacular estuary that flows through agricultural land around Denmark before flowing into the sea near Ocean Beach. The Group would like to thank the Wilson Inlet Catchment Committee for hosting the dairy farm visits and graciously turning on a glorious sunny day in a beautiful part of the world.

For more information or to get involved contact estuary@dwer.wa.gov.au