Aboriginal significance
Back to overview

Oyster Harbour is permanently open to King George Sound and is the only south coast estuary without a sand bar; it has a surface area of 16 km2. The entrance channel at Emu Point is five to six metres deep. The major rivers connected to the harbour, the Kalgan and King Rivers, are estuarine for approximately nine and seven kilometres respectively. Yakamia Creek, which meanders through urban areas of Albany, enters the Harbour on the south western side.

Oyster Harbour has seen some successful restoration of seagrass habitat following losses of 90 per cent in the 1990s; now seagrass covers around 35 per cent of the sediment. Restoration trials of the native oyster (Ostrea angasi) are also underway, coordinated by The Nature Conservancy. Seagrass and shellfish reefs are both important for maintaining good water quality, sediment stabilisation, nursery habitats and biodiversity values.

The critical management role for supporting the recovery pathway of estuary health for Oyster Harbour is to address catchment derived nutrient inputs from agricultural and urban land uses.

Oyster Harbour is in the traditional lands (boodjar) of the Menang Noongar people and is known as Miaritch (Miyaritj) – which refers to the meeting place of the Warrecoolyup (King) and Kalganup (Kalgan) rivers, and also a meeting place of the Menang people. It is also known as the ‘home of all the fishing traps’, or mungas, with the land area adjacent to the traps known as Tamungup.

Today there remains eight fish traps on the northern shoreline of the harbour which are under the protection of local Menang people through the Albany Heritage Reference Group Aboriginal Corporation with the help of local and state government. 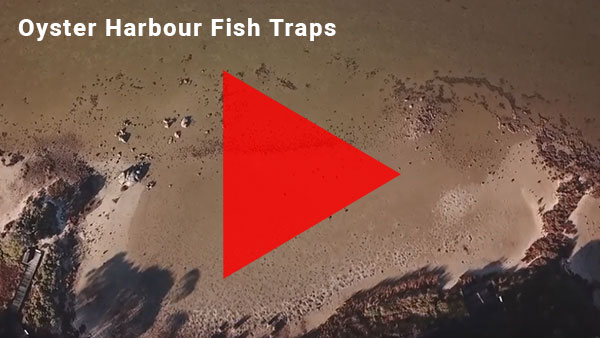