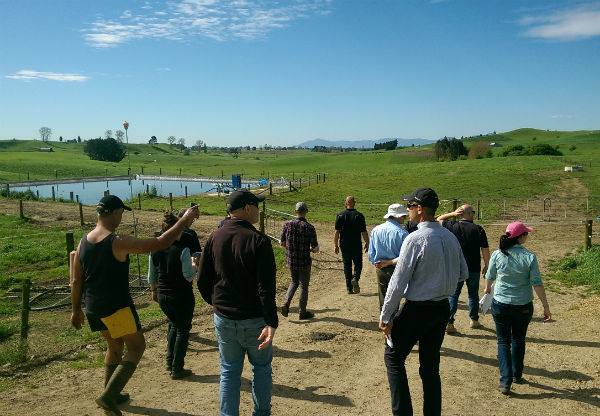 With over 12 000 dairies in a tiny country, New Zealand dairy farmers know how to deal with the back end of a dairy shed. That thinking led a small team from the DairyCare Effluent project to visit the Waikato region, located in the North Island of New Zealand.

The team was eager to look at a variety of system designs and management practices utilised by farmers in the Waikato region to deal with issues faced in Western Australia including high water tables, sandy soils and large herd sizes.

“The NZ dairy farms we visited had excellent systems to manage their effluent that incorporated good equipment and monitoring to allow the reuse of this product on the farm,” said DairyCare Effluent Project Coordinator Bree Brown.

The mindset of farmers really stood out. Regulation of dairy effluent in New Zealand appears to be a strong motivator, however the nutrient value contained in effluent was readily acknowledged by farmers; they truly believed that effluent was a fertiliser resource and not a waste product.

“Farmers were actively identifying areas of soils on their farms where they could apply and reuse effluent,” said Bree.

“This not only allowed them to keep fertiliser costs down across larger areas on the farm, but it allowed them to build smaller effluent storage ponds, resulting in further savings around construction costs.

The Western Australian project team were also interested to explore how effluent management practices were influenced by regulation and high social expectations.

“Effluent management and reuse is very much incorporated into daily operation on dairy farms in New Zealand.

“Significant investment, good planning and good design appeared to be paying off for the farms that were visited.

“It was a great opportunity to look at different and innovative ways of managing effluent.

“The project team is now looking to incorporate some of the ideas and designs into dairy effluent systems on WA farms that will be valuable for both farmers and our waterways,” said Bree.

The trip was supported through the Sustainable Agriculture program being delivered under the Regional Estuaries Initiative and Revitalising Geographe Waterways programs. Dairy Australia and Western Dairy also provided support for the study tour.