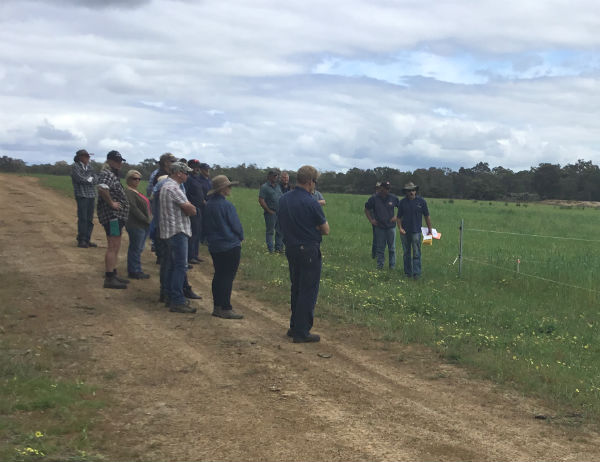 Held on the property of Stuart and Sheena Smith’s property in Narrikup, David Rogers from DPIRD unveils demonstration site results.

Pasture field trials were conducted throughout the south west and south coast during November 2017 to demonstrate the benefits of matching fertiliser application to productivity targets reported in soil testing results.

At the trial, held on the property of Stuart and Sheena Smith’s property in Narrikup, Oyster Harbour Catchment Group (OHCG) project officer, Bruce Radys said it was great to see a good turnout of local farmers currently involved in the Regional Estuaries Initiative soil testing program.

“The field walk was also a good opportunity for farmers to get together and discuss a range of issues relating to fertiliser application and nutrient levels,” he said.

“All bets were on when David Rogers, demonstration site coordinator from the Department of Primary Industries and Regional Development (DPIRD), asked everyone to guess which plots had received high levels of Phosphorus.

“This caused much speculation and discussion, though no one was willing to back their guesses with money.

“As David labelled the plots it revealed a story which was not as expected,” said Bruce.

“While some of the high Phosphorus application plots looked good, this was not repeated across the trial, with some of the low Phosphorus plots looking just as good, said DPIRD’s David Rogers.

“There was no significant difference between nil application and 150kg/ha of superphosphate.

“There was also no significant difference between district practice (150 -200 kg/ha of superphosphate) and nil application on any of the five demo sites tested last season.

“This indicated, as was reported in the landowners soil testing report, that there was already adequate levels of phosphorous in the soil to maintain production,” explained David.