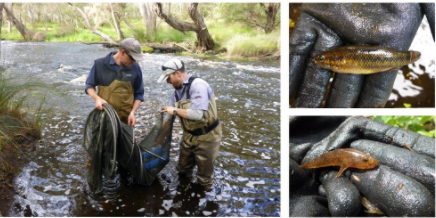 Scientists from the Department of Water and Environmental Regulation conducting health checks on the Scott River and the rare Balston’s pygmy perch.

Health checks of waterways entering the Hardy Inlet, Vasse-Wonnerup, Leschenault and Peel-Harvey estuaries have revealed most of the sites assessed are dominated by fish and crayfish species unique to south west WA.

The assessments identified some areas of degraded riparian zones, damage by stock access, and poor water quality – all of which are having a detrimental effect on native species and overall ecological health.

Scientists from DWER have been conducting health checks on a number of waterways in the south west as part of REI’s river health program.

The assessments target a range of essential river components including the health of the riparian vegetation, aquatic habitat, water quality, and the fish and crayfish community.

The fish and crayfish communities at most of the sites sampled were dominated by species endemic to the south west of WA. This means that they are found nowhere else on earth. In fact, the south west of WA has the highest percentage of endemic freshwater fishes of any major Australian draining division, with over 80 per cent of the regional fishes being endemic. Also, 100 per cent of the region’s native crayfish are endemic. These species have developed specialised survival strategies to match the conditions of the south west.

“For example, one of the most abundant crayfish we found was the gilgie” DWER Manager, River Science Dr Tim Storer said.

“This freshwater crayfish is able to survive the dry season by burrowing through the soil to the water table – a remarkable adaptation to the seasonal nature of many of the streams of the south west.”

“The fish species are also highly adapted to drying conditions. Many species use the short-term higher water levels through winter and spring to access upstream breeding grounds, then quickly retreat to summer refuge pools as the rivers dry.”

The assessment of waterways of the Hardy Inlet showed they were dominated by endemic freshwater fish and crayfish.

Notably, lead scientist for the south west, Bronwyn Rennie, said a total of 1,300 native freshwater fish were counted in one day at one site on the Scott River. This is a considerable amount and highlights the site as an important refuge and spawning ground for native fish, which includes the rare Balston’s pygmy perch.

“It was exciting to find Balston’s pygmy perch in the Scott River, as this species is listed as vulnerable and is at risk of extinction in the wild due to loss of habitat and salinity” Bronwyn said.

“This, combined with the fact that two Scott River sites showed no signs of exotic species, was a very encouraging result for the Scott River. The perseverance of the healthy fish and crayfish communities at these sites is a clear reflection of the good condition of the riparian zone along much of the Scott River.”

In contrast, several sites in the Peel-Harvey catchment were found to have sections showing poor health and an abundance of exotic species. This is likely linked to the lack of native vegetation on the river banks, which leads to erosion, poor water quality, and loss of aquatic refuge and spawning habitat. Further downstream, this can affect the quality of water entering the estuaries.

However, despite degraded health at several sites, these rivers still retain many native species.

“Of particular interest were the large numbers of cobbler found in the Murray River, upstream of Pinjarra,” Dominic Heald, who leads investigations in the Peel region, said.

This apparently healthy population in the middle reaches of the Murray is encouraging as other studies in the south-west have suggested cobbler populations are in decline due to factors such as salinisation.

“Protecting and improving the health of areas such as the Murray is therefore important for the species’ survival,” Dominic said.

Exotic species were found at many sites in the Peel region, with goldfish present at two thirds of assessed sites and yabbies present at half of the sites.

“These exotic species directly compete with native animals for food and habitat and should not be released into the natural environment,” Dominic continued.

The survey results highlight the importance of work being conducted by REI, which has a considerable focus on improving streamside vegetation and reducing cattle access. This work is in partnership, and complements, previous and ongoing work by groups such as Peel Harvey Catchment Council and Harvey River Restoration Taskforce.

The river health assessments support REI initiatives by identifying ecological values as well as stressors. This is important information for guiding the implementation of on-ground work to protect and improve waterways.