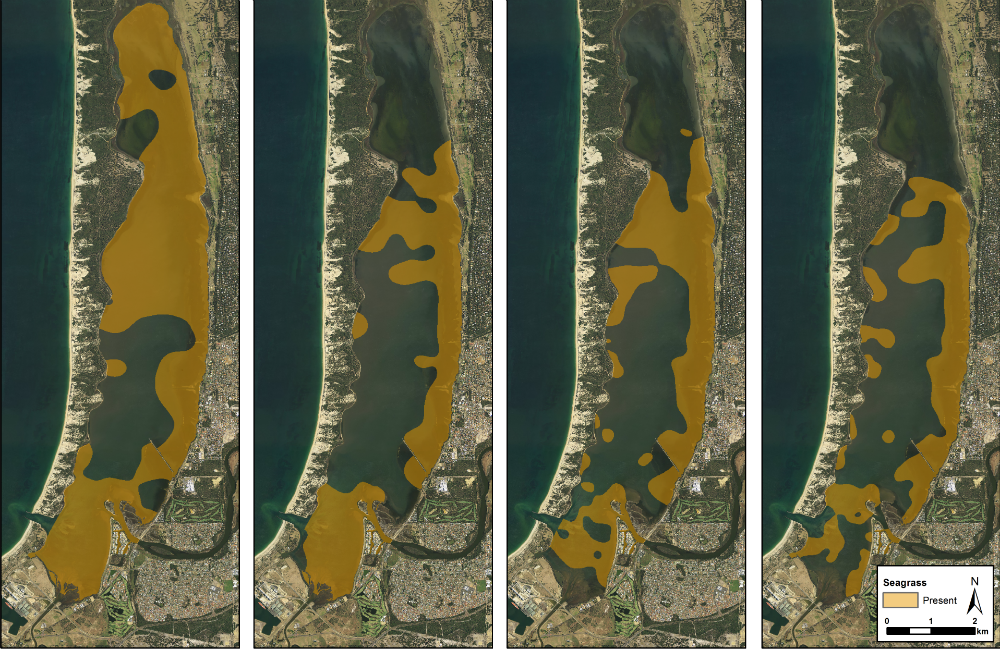 Seagrass surveys in the Leschenault Estuary have been conducted by the Department of Water and Environmental Regulation since 2009. That year showed an abundance of healthy seagrass meadows covering about 70 per cent of the estuary. Seagrass monitored again in the summer of 2015, told a different story.

Department of Water and Environmental Regulation (DWER) environmental officer Marta Sanchez Alarcon said monitoring in 2015 suggested that seagrass in the Leschenault Estuary was near tipping point. Plants appeared in poor health with few production of flowers and fruits and plant distribution covering only around half of the area assessed in 2009.

“The most likely factors that contributed to the deterioration of seagrass were persistent algal blooms caused by excessive nutrients in the water, increased salinity, less light reaching seagrass and unusually high water temperature,” said Marta.

“Since then, seagrasses have been monitored in the Leschenault Estuary every summer to assess its performance condition and distribution.

“While detailed data analysis of seagrass monitoring undertaken in 2017 is still required, the seagrass population appears more stable, with some signs of improved reproduction (flowers and fruits), though still under stress.

Seagrass requires good water and sediment quality to thrive, which makes it a good indicator for estuarine health. The team has commenced monitoring seagrass in the Leschenault Estuary for the 2017-2018 summer period and initial observations look promising.

“As done previously, we will monitor three fixed sites to assess seagrass condition and resilience. Seagrass samples will be collected by core and processed in the lab. Temperature and light loggers will be deployed to understand the environmental conditions where seagrass live,” said Marta.

Findings from the studies will reported via the REI website soon.

To help protect seagrasses you can: