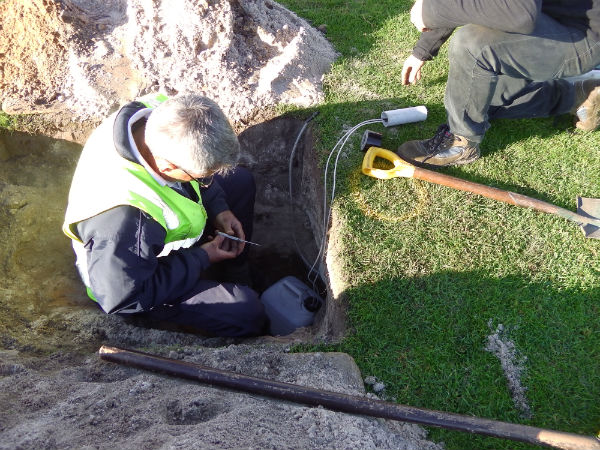 A scientific trial using the soil amendment product Iron Man Gypsum (IMG) that stops fertiliser washing from soils to groundwater and polluting waterways is underway in the Vasse-Wonnerup catchment.

The trial at the Vasse Sporting Complex aims to reduce the level of nutrients leached from the newly constructed oval, a consequence of fertilisers applied when the land was farmed.

This site of the sporting complex was previously grazed and fertilised, which left a legacy of high phosphorus content in the sandy soils. Without treatment the site would continue to leach this phosphorus into local waterways.

“The additive is a mineral processing product developed by Iluka Resources called IMG. IMG binds phosphorus, keeping it within the soil and making it available for plant growth rather than washing into local waterways,” said

“Water monitoring stations called lysimeters that collect water percolating below the turf have recently been installed and will be sampled monthly to track how effective the soil amendment treatment is at reducing nutrient leaching.

“If the trial proves successful, it has numerous potential applications from helping protect waterways from redeveloped farmlands, to reducing use of fertilisers for turf by helping retain them longer in the soil rather than washing away shortly after application,” said Brad.

The trial is one of two that have started in the Vasse-Wonnerup catchment as part of DWER led Revitalising Geographe Waterways program.

This trial is a partnership between the City of Busselton, DWER and Iluka Resources Ltd.

A further two trials are in the planning stages, as part of DWER’s Regional Estuaries Initiative which targets a further five estuaries in the South West.