The Regional Estuaries Initiative supported the ongoing water quality, seagrass and macroalgae monitoring of the Wilson Inlet since 2016 with monitoring continuing through Healthy Estuaries WA.

Below is the latest data about the condition of Wilson Inlet.

Macroalgae (or seaweeds) are a vital and natural part of many estuarine and marine ecosystems. They provide important habitat and food for many creatures, and perform essential ecological functions like oxygenating water and absorbing nutrients. However, an overabundance of macroalgae can become a problem, and often indicates too many nutrients in the water. Macroalgae can therefore be indicators of water quality. Assessing macroalgae in estuaries forms part of our integrated understanding of ecosystem health.

In the 1970s, concern rose for the Wilson Inlet following a drastic increase in macroalgae, as well as the seagrass Ruppia. Such increases often indicate eutrophication – a process which occurs when a waterbody is enriched by an oversupply of nutrients, such as nitrogen and phosphorus. This encourages greater plant growth and algal blooms, which can lead to depleted oxygen, as well as occasional foul odours and fish kills. Fortunately, the Wilson Inlet is not currently showing major signs of eutrophication.

There are many different macroalgae species (which should not be confused with seagrasses). These are generally grouped based on their appearance or pigments in their tissue. Various historical studies of macroalgae in Wilson Inlet, as well as recent snapshot surveys by the Department of Water and Environmental Regulation, have identified many species present. Several of these can also grow as epiphytes (organisms that grow on other plants) on the Ruppia leaves and can smother seagrasses if growth becomes excessive.

Some of the macroalgae found in the Wilson Inlet include:

As part of the department’s seagrass monitoring, snapshot studies occur in Wilson Inlet during survey years. Macroalgae were observed on 27% of occasions in April 2018 and December 2019 (note: areas in the central basin more than 3m deep were not sampled). The cover of macroalgae in these areas was low (about 17.5%) in April 2018 and low to medium (about 37.5%) in December 2019. Both observations were during periods when the sandbar was closed. Macroalgae were less abundant and less dense in December 2017 when the sandbar was open.

The sandbar was open from 24 August 2017 to 25 March 2018 but had closed naturally by the time the April survey occurred. The sandbar was not opened in 2019 due to low water levels.

Since October 2016, the Department of Water and Environmental Regulation has monitored Wilson Inlet’s water quality at seven sites every two weeks. The first 12 months of data (October 2016 to September 2017) has been compiled to give a comprehensive overview of the annual condition of the estuary.

In 2016/17 Wilson Inlet monitoring data show a healthy and productive estuary. However, it does show impacts of excess nutrients flowing in from the catchment at particular times of year.

Wilson Inlet’s water quality is strongly influenced by the freshwater inflows from rivers and by the sandbar separating the inlet from the ocean. The bar is usually dredged in winter to stop low-lying lands flooding after winter rainfall. It naturally closes due to waves depositing sand to reform the bar in late summer or early autumn each year. In 2017 the bar was closed for 6 months, from 23 February to 24 August.

When the bar was closed the water was brackish, well-mixed, oxygenated from the surface to the bottom with low concentrations of nutrients and algae – all signs of healthy conditions. In contrast, when the bar was open, salinities ranged from fresh to marine, nutrient concentrations were higher due to the nutrient-rich inflows from the catchment and consequently there was more algal growth.

When the bar was open, marine water entered the estuary and formed a heavier, salty layer underneath the brackish estuary water (stratification). When stratified, nutrients were released from sediments due to chemical changes caused by low oxygen conditions (hypoxia) in the bottom layer.

Overall microalgae densities were low, however, three periods of higher algal densities were observed; two of them during the bar-open period in spring 2016 and 2017 and one in autumn 2017.  There were no reported fish kills or harmful algal blooms.

Nutrients entering the Inlet from the catchment and reduced winter flows due to climate change remain the highest risks to Wilson Inlet. Healthy Estuaries WA continues to support and focus on efforts that address nutrient inputs from agricultural and urban sources.

This map shows how the 7 monitoring sites are grouped into 3 zones. 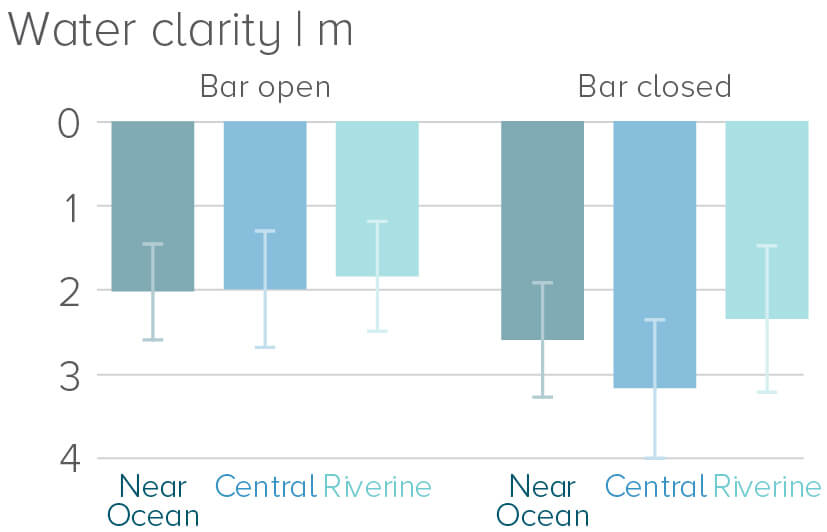 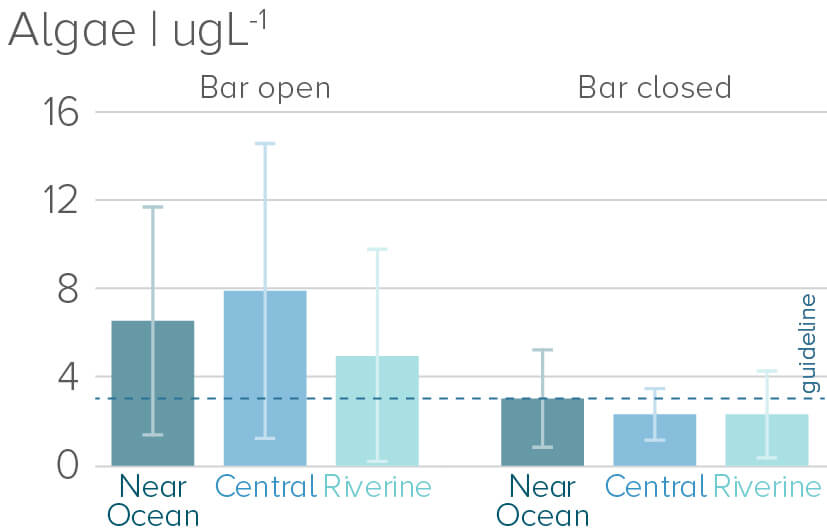